Since smartphones have evolved into small high-performance computers, the number of apps has been growing steadily. Whether for meditation, sports, or gaming, there is almost nothing for which there is no app. This is also true in the cycling sector. Here, apps have long been in competition with bike computers. What is more, in conjunction with GPS trackers, they have revolutionized theft protection.

Having a hard time finding your way through the plethora of cycling apps? We will introduce you to some of the best cycling apps in 2021 and give you tips on choosing.

What a cycling app can be used for

There are many uses for cycling apps:

Navigation: Anyone who has tried to plan their bike tours with Google Maps knows that there is room for improvement. That is why route planners and navigation apps are very popular among passionate bikers. They can often be used as a bicycle navigator and also for orientation during other outdoor activities.

Tracking: With the help of tracking apps, you can track your own location and have an overview of the routes you have taken.

Theft protection: Apps also play a central role in theft protection, especially in view of the fact that professional thieves are not deterred by any lock. Combined with a GPS tracker, they open up the unique opportunity to map my ride and recover stolen bikes. How well this works, however, depends on the tracker and the associated app.

Training support:Apps for the fitness program tell you essential details about your training progress. Many manufacturers also use competitions and leaderboards within a community for motivation. The option to share performance data in social networks is almost standard.

In addition, there are applications for the correct adjustment of bicycle saddles, the recognition of mountain peaks in the vicinity, and much more.

Tip: The rich selection in the Google Play or Apple Store is tempting and the storage space on modern smartphones is generous. But beware. If you install applications on your smartphone on a whim, the overview is quickly lost. Plus, you run the risk of spending more time on your phone than enjoying your surroundings or paying attention to traffic. We think less is more if the few are well chosen.

Plan routes, navigate, protect your e-bike from theft – the following apps are among the best in their field. 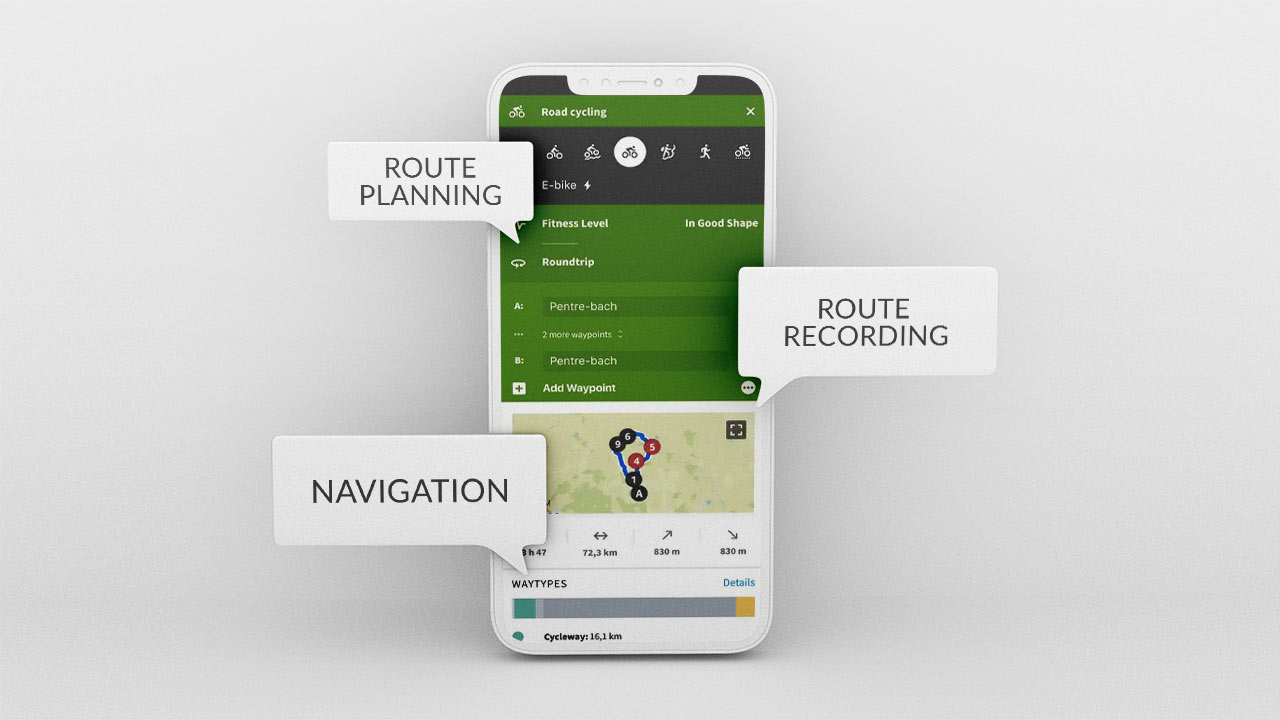 Komoot is perhaps the best-known bike app for route planning, and it is also popular with hikers. Once you have planned your tour, you can let Komoot navigate you directly on your smartphone or you can integrate the app with a GPS bike computer. This puts Komoot on the cutting edge.

The tours that the application suggests are also worth seeing – or riding. You can import and export them, record them and export them to social media channels. In addition, the whole thing looks nice and clear.

However, Komoot is not price-free, at least not really. Because before you pay, you only get a free online map. At best, that is enough for short trips to the next beer garden. Maps for individual regions, which you get through in-app purchases, are not cheap. It is better to buy an around the world package for around 30 euros. There is also a premium tariff with features such as live tracking, dynamic weather forecasts, and a multi-day planner. This costs 4.99 euros per month or 59.99 euros for annual billing. Whether it is worth it depends on your habits and goals.

Komoot is available as a price-free version with an offline map; additional maps cost extra, but are also available in a complete package for once 30 euros. The premium plan costs 4.99 euros a month or 59.99 euros annually.

Integration with many different devices possible

for route planning in the app you need to be online 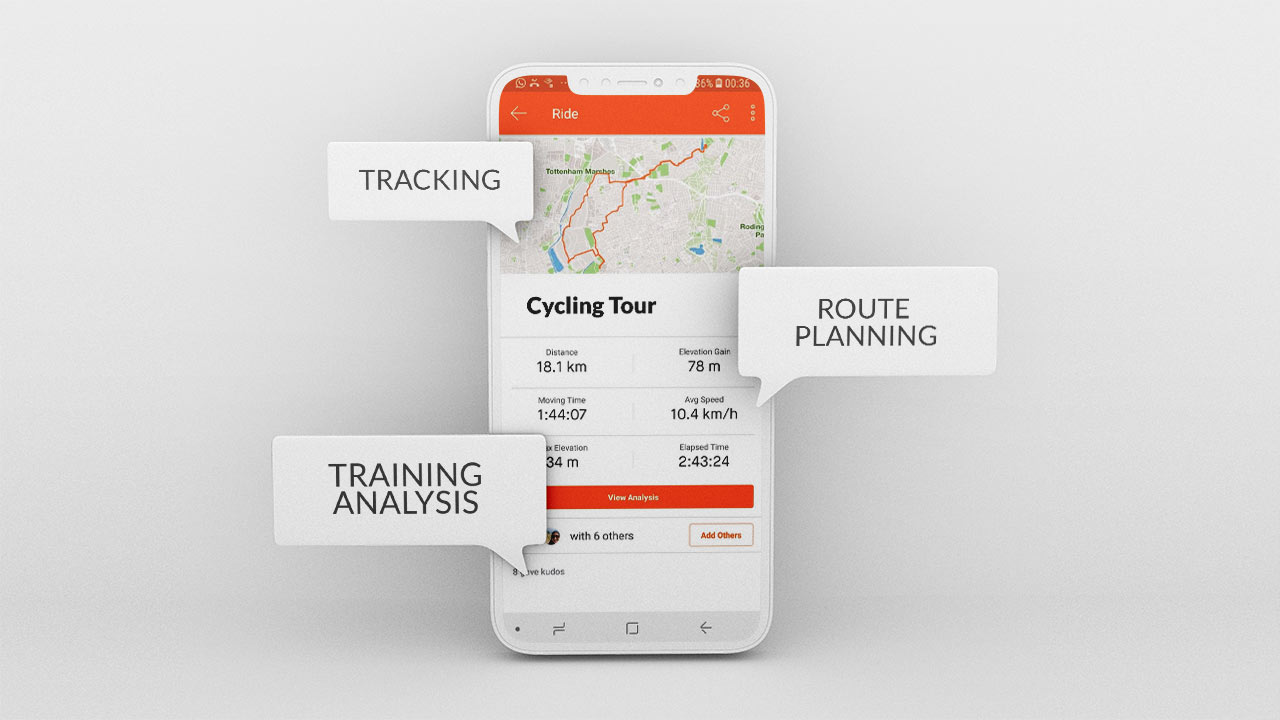 You may have heard the phrase “If it is not on Strava, it did not happen.” From its popularity, you can tell how widespread the combination of fitness tracking apps and social networks is. Strava is aimed at a wide range of athletes, from cyclists and runners to skiers and yogis. However, most users are walking or cycling.

The maxim of the Strava community is see and be seen. That is because people love to use the app to record and share their routes and performance data, such as speed. You can pair it with sensors to measure your heart rate or cadence, for example. Strava also connects to hardware from different manufacturers.

A route network of Strava users is available for route planning. However, like many other Strava functions, route planning is only available with a paid membership. At 7.99 euros or 5 euros (with annual payment) per month, Strava is not relatively cheap for cycling apps.

Recording is not always correct

Bikemap – large selection of routes for Android and iOS 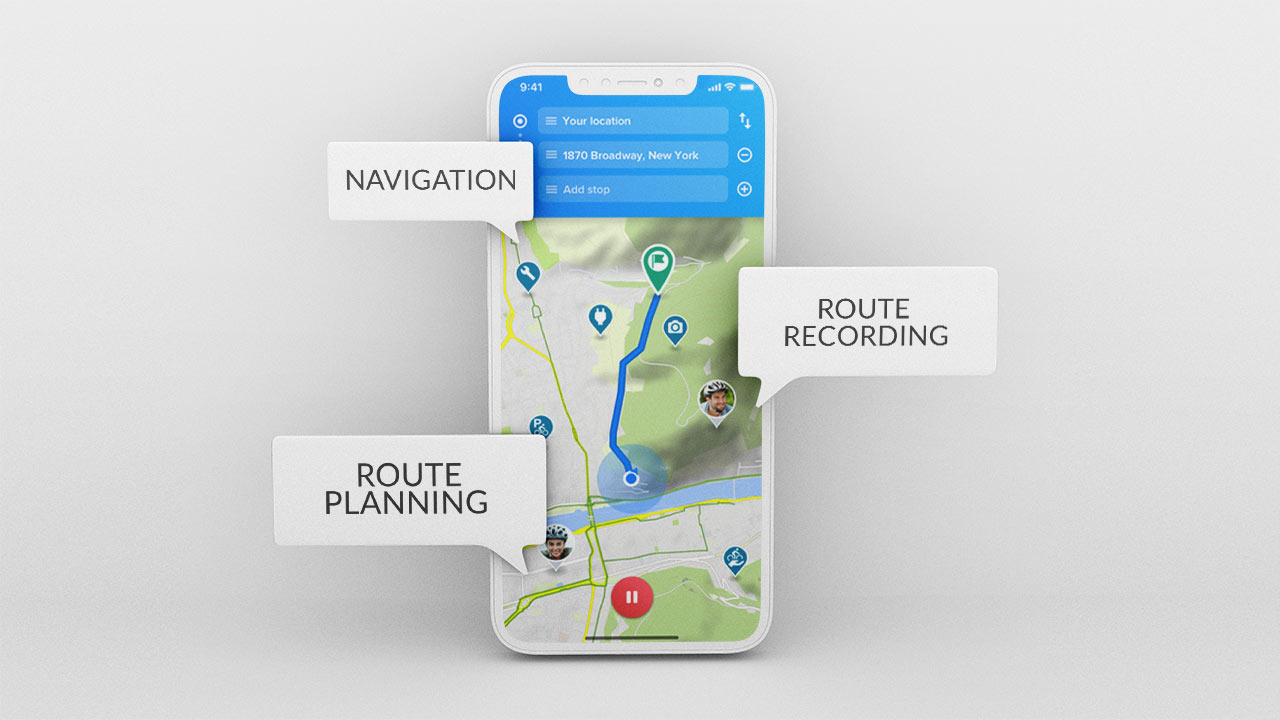 Bikemap advertises the world’s most extensive collection of routes for bicycles. The app can be used on Android or iOS and is ideal for finding the correct route in more than 100 countries. Once the route has been selected, you have a bike navigation system that works like the one you know from your car, including voice output and valuable additional information. For example, you get information about workshops, public toilets, or charging stations for pedelecs. Statistics on the tours you have ridden are stored.

The extensive collection of routes, the simple functionality, and the app’s reliability make Bikemap a reliable companion on tours. However, if you want to use offline maps or optimize the navigation for mountain bikes or road bikes, you have to use the premium rate. Since this costs a hefty 9 euros per month when paid monthly, an annual payment of 39 euros makes much more sense. The alternative to both: lifetime use for a one-time payment of 99 Euros. The lack of interfaces to GPS navigation devices is also a drawback for some.

Basic version at zero cost, the premium for 9 euros a month or 39 euros a year, or one-time 99 euros for lifetime use.

Large selection of routes for your tour

Use of offline maps is only possible in premium mode 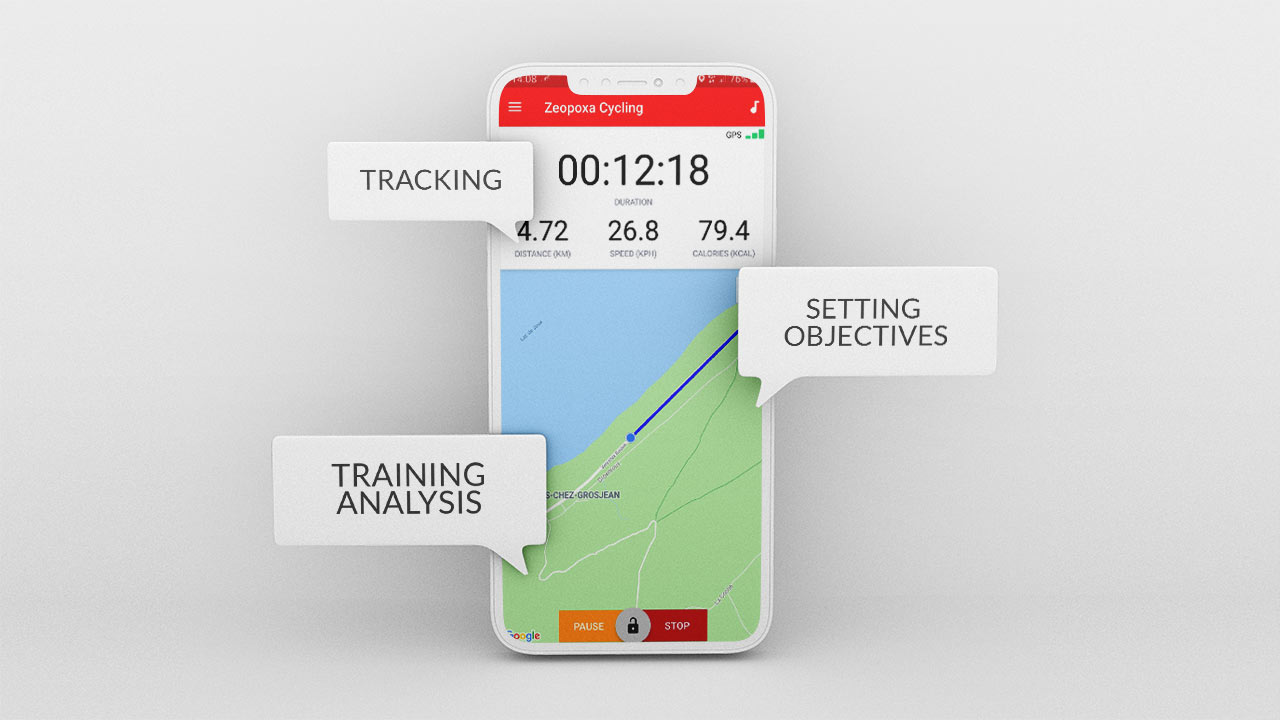 Zeopoxa’s cycling app is less hyped than Strava or Komoot.. But hey, at the end of the day, it is about what is in it.

If you are looking for a simple “map my ride” app without a lot of chichi, with which you can record routes ridden and analyze data, you can not go wrong with “Cycling” from Zeopoxa. This is all the more true since the cycling app is price-free. However, there are two catches: for paying nothing, you have to live with ads, and “Radfahren” by Zeopoxa is currently only available for Android smartphones.

not available for iOS devices 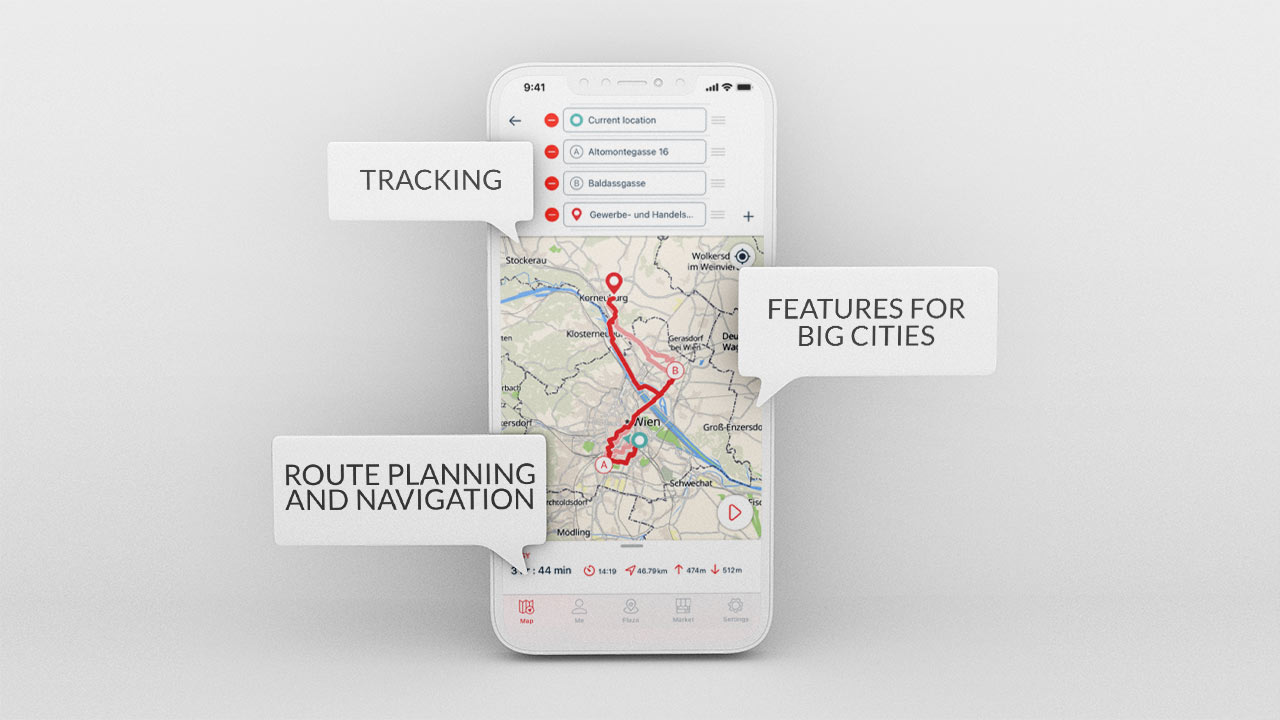 Despite all the enthusiastic mountain bikers, many cyclists in this world are primarily in the city. The bike app Bike Citizens is aimed at them. This has earned the application designations such as “app for urban bike hipsters.”

In fact, Bike Citizens is a well-rounded app for urban cyclists. The application can be used to plan routes as well as record rides and share them with friends. During the ride, you can be navigated with the help of voice announcements. You also get an overview of your rides as a fancy “heat map”.

What makes Bike Citizens stand out are the details. These include the fact that you receive information about interesting environments in your city or that you can tailor the route planning to your type of bike. Maps can be downloaded offline. The underlying map material is based on OpenStreetMap.

Basic Bike Citizens features are price-free on Android and iOS devices. In addition, you can define your personal free premium area once. This may have a diameter of 7 km, in which you can use many premium features without paying.

Apart from that, features like online navigation with voice output, planning routes with as many stops as you want, or offline use of route planning and navigation are only available with a paid premium subscription. For this, you pay a manageable 3.50 euros a month or 28 euros once a year. Also worth mentioning are the campaigns with which Bike Citizens works to increase the share of cycling in cities.

By the way: Bike Citizens is primarily known for suggesting recommended routes to cyclists in big cities all over the world so that they can reach their destination safely, even during rush hour. However, you can also use the bike app away from the city.

Free of charge, with a premium version for 3.50 euros per month or 28 euros per year

Already convincing in the price-free app

Offline maps unfortunately only available for a fee 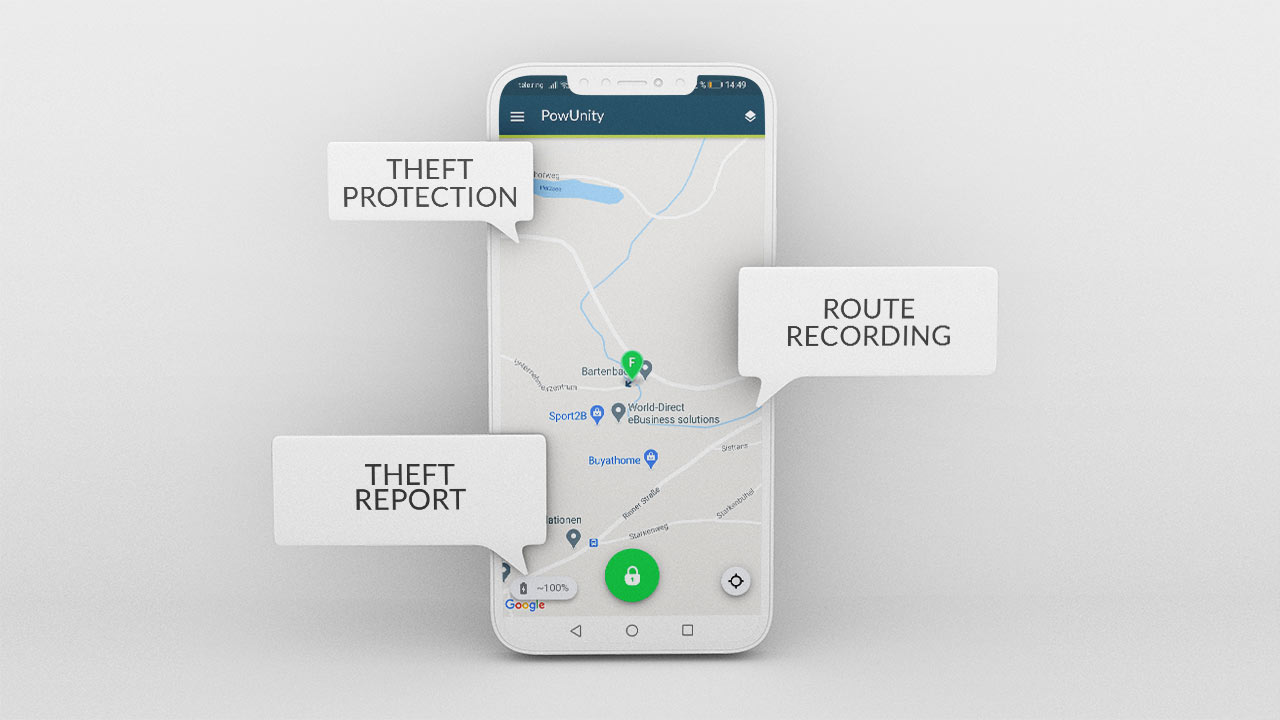 Connect it to the BikeTrax GPS tracker permanently installed in your e-bike. The app will then record all routes automatically – without you having to press a button. You can then view, manage and share the routes you have ridden in the app, as well as import them into other cycling apps like Strava or Komoot. Recently, you can even allow a friend to follow your e-bike and experience your rides through their PowUnity app.

Plus, the app notifies you immediately if an unauthorized person tampers with your e-bike. If the bike is stolen before you can intervene, you can track its location in the app and hand that data over to the police. Because it is real-time tracking that works across Europe, you have the best chance of getting your e-bike back. Thus, the duo BikeTrax GPS device and associated PowUnity app sets standards in theft protection.

By the way, you can send the theft report, including the current location of your e-bike, directly from the app. Here you will also find a Bike Pass for important data and information about your bike.

Passionate hobbyists can also look forward to a particular feature. With the necessary technical knowledge, Bike Trax can be integrated into your own smart home. Then, for example, the home alarm system goes off when your e-bike is moved.

The PowUnity app is available with every BikeTrax GPS tracker – for Android and iOS. In the first year, the data transfer is price-free; from then on it costs 39.50 euros in the annual subscription.

Android and iOS, also available as a web app

Free in the first year, then 39.50 euros in the annual subscription.

High chances of getting stolen e-bikes back

Whether tracking, navigation, or theft protection, some important questions will help you choose the right bike app:

The right cycling apps have many advantages

Whether you use your bike primarily in the city or go on an extended tour with your mountain bike every weekend, whether you own a mountain bike, road bike, or e-bike, cycling apps can simplify route planning, ensure that you get to your destination quickly as a bike navigator and, in conjunction with a GPS device, provide highly effective theft protection for expensive bikes. You can get all of this price-free or at fair prices.

You must pick the right cycling app from the ever-growing selection. Also, keep checking your selection. After all, the introduction of expensive premium version rates can quickly impair the usefulness of an app. In that case, it might be better to look for a competing product for your next bike tour.

Here you will find an overview of all cookies used. You can give your consent to entire categories or have more information displayed and only select certain cookies.

Marketing cookies are used by third parties or publishers to display personalized advertising. They do this by tracking visitors across websites.