Narrowband IoT is a radio technology developed specifically for the Internet of Things and is being promoted by companies such as Deutsche Telekom. It is characterized by the following features:

With these characteristics, NB-IoT belongs to the so-called Low Power Wide Area (LPWA) technologies. The basis for the technology is the 3GPP standard (3rd Generation Partnership Project). Such as LTE-M, NB-IoT uses the licensed frequency spectrum, or more precisely, the LTE network. This means it can be used with existing infrastructure.

What does Internet of Things mean?

The Internet of Things or IoT is the term used when physical objects are connected with each other and exchange information, for example, via sensors. In this context, machine to machine (M2M) is also important.

A well-known example of IoT applications are smart home applications. Smart home devices start with thermostats that automatically turn down the heating, extend to automated ventilation systems, and connected entertainment solutions. Cellular devices can also be part of the IoT. Tracking, for example, in logistics or theft protection, is also one of the widespread IoT applications.

The article “Internet of Things, bikes, and GPS tracking: the future is connected!” explains in detail what IoT is, what different application areas exist, and which technologies can be distinguished in the IoT area.

For which applications is Narrowband-IoT suitable?

Narrowband IoT was developed for the Internet of Things. However, not for all IoT applications, but specifically for those requiring a wide range, good building penetration, and low energy requirements.

This means, if technologies such as WLAN or EnOcean are used in smart home devices, NB-IoT is suitable for the following applications.

However, there are IoT applications that do not benefit from the advantages of NB-IoT. This applies not only to data-intensive smart home devices and entertainment applications but also to some tracking tasks in the IoT.

Narrowband IoT vs. other wireless technologies

In addition to NB-IoT, other radio standards are suitable for the Internet of Things and data exchange over long distances. In the following, we will look at the advantages and disadvantages of the existing technologies. We also discuss which standard is suitable for which applications, and where individual technologies reach their limits.

LTE-M or LTE-Cat-M1 is the second new LPWAN – Low Power Wide Area Networks – alongside NB-IoT. At first glance, both standards are very similar; at second glance, significant differences reveal themselves:

Handover: When a mobile terminal moves to a new radio cell without the connection being interrupted, this is referred to as a “handover”.

These differences mean that NB-IoT and LTE-M are suitable for various IoT applications:

Narrowband IoT vs. Sigfox and LoRa

The terms LoRa and Sigfox often come up in line with NB-IoT and LTE-M. These are two additional transmission standards developed for transmitting small amounts of data and focus on expanding the Internet of Things.

The most significant difference between NB-IoT and LTE-M and LoRa and Sigfox is that NB-IoT and 2G build on the same infrastructure, in which cellular technologies communicate as well. This means they share what is known as a licensed spectrum with established network providers. This infrastructure is constantly being expanded and today covers many applications of data transmission worldwide. In contrast, the providers of LoRa and Sigfox use their own developed and so-called “unlicensed” frequency spectrum.

However, these two technologies also differ in their properties and their areas of application:

The inadequate network coverage of LoRa and Sigfox is a deficit. It is not sufficient for optimal digital e-bike theft protection, which will not change in the future. Technologies that build on the licensed frequency spectrum and existing mobile radio standards will always have an advantage in network expansion.

Now we come to an old acquaintance that still plays a significant role, especially in e-bike tracking: 2G.

Where does the name come from?

The 2G standard exists since the 1990s. This network transmits data extremely well and has no gaps. The main reason for the expansion to 3G and 4G is primarily the possibility of higher data transmission (bandwidth). While the 2G network was sufficient in the 1990s, since videos were not yet loaded via cell phones, the network was inevitably expanded to 4G with the introduction of the smartphone.

The 2G standard has the most comprehensive network coverage and is currently the best solution for tracking bicycles and e-bikes.

However, tracking a vehicle such as a bicycle, car, or e-bike does not require this high bandwidth. Data transmission rates of the 2G standard are absolutely sufficient. As the 2G network has existed since the 1990s, the network coverage is also correspondingly dense. Thus, you may no longer have 4G network reception in the field, but you will have 2G network reception.

Comparison of advantages and disadvantages of the different standards

There are two key reasons why NB-IoT is not the first choice in GPS tracking for theft protection:

NB-IoT builds on the LTE standard of the smartphone. Advantage: an already existing mobile communications infrastructure is used as a basis. However, to exploit this and make it suitable for narrowband IoT, it must first be upgraded. The upgrade takes time and is pushed faster in urban areas than in rural ones. The network coverage is also being expanded more quickly in certain countries (e.g., Germany) than in others.

For tracking bikes via NB-IoT, this is a disadvantage in 2021: In the Frankfurt area, for example, where the mobile network has already been upgraded to the NB-IoT standard, the network is sufficient. However, if the pedelec is stolen and taken to rural areas or abroad via the highway, the location of the bike or e-bike may no longer be transmitted. However, high building penetration and lower energy consumption are not needed if the stolen bike is lost in the radio hole of rural areas. Also, data such as daily routes cannot be recorded when I am cycling off-road and in nature.

No real-time tracking is possible.

Logistics service providers who want to tell their customers approximately where their package is located can use NB-IoT. The same is true if a company wants to determine the approximate location of goods.

When it comes to theft protection, however, real-time tracking is critical. It is the only way to know where your bike is. However, because of its high latencies and because the technology does not allow for handover, NB-IoT does not enable real-time tracking. That will not change in the future.

It follows: NB-IoT is not suitable for e-bike tracking, unlike LTE-M and 2G. 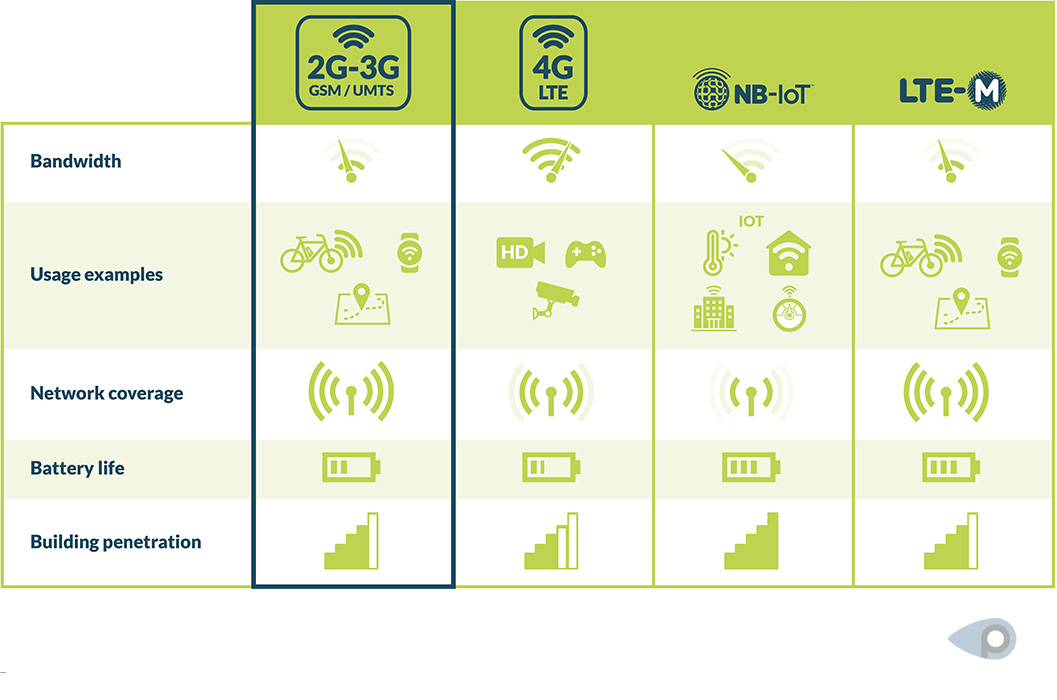 Bike and e-bike tracking: 2G as the optimal technology

Old but good: There are several reasons why PowUnity is currently relying on 2G as the radio standard for GPS tracking of e-bikes or motorcycles:

LTE-M or LTE-Cat-M1 will also be used in the PowUnity devices, no question. But only when the necessary infrastructure for the GPS trackers of the e-bikes is guaranteed. So that we can give our customers the same anti-theft guarantee as we do today with 2G technology.

Conclusion: NB-IoT is the standard of the future for stationary applications

Narrowband IoT has many advantages as a technology for the Internet of Things, from its low power consumption to licensed spectrum and existing network infrastructure.

Accordingly, the wireless standard will play a prominent role in the increasing connectivity of objects in everyday life.

However, there are areas of application for which NB-IoT is less suitable than LTE-M or currently still 2G. These include real-time tracking of mobile objects. Because of the comparatively high latencies and the fact that networked devices have to re-dial every time you switch to a new mobile cell, this will not change in the future.

The BikeTrax GPS tracker uses 2G technology to protect your e-bike. This is currently the best for this purpose.

That is why PowUnity does not rely on NB-IoT but on 2G. With GPS tracking, you benefit from seamless network coverage and real-time location transmission – the best prerequisites for locating your stolen e-bike at any time and getting it back with the help of the police. When the network for LTE-M or LTE-CAT M1 is ready – but only then – we will also switch so that you can constantly enjoy the best technology.We will leave NB-IoT, Sigfox, and LoRa to other providers with a clear conscience.