The Internet of Things (IoT) is ubiquitous. Bicycles and e-bikes can also be connected to other objects via the Internet to exchange information. In addition to bike computers, GPS trackers stand out in this context. In conjunction with satellites and modern apps or platforms, they make it possible to track the location of bikes in real-time. This is revolutionizing e-bike protection and fleet management.

How does a GPS tracking device work on e-bikes?

GPS is nothing new. The technology was developed back in the late 1950s for military purposes. However, it was not fully released for civilian use until 2000. Since then, and with the success of the Internet of Things, GPS navigation and tracking systems have steadily gained in importance.

Today, it is impossible to imagine our lives without those technologies. Best example: navigation systems or online map services, starting with Google Maps. Navigation systems made road atlas that used to be in every glove compartment just as redundant as the folding maps for city trips or bike tours. A GPS tracker has overtaken such features.

The functionality of an IoT GPS tracking device at a glance 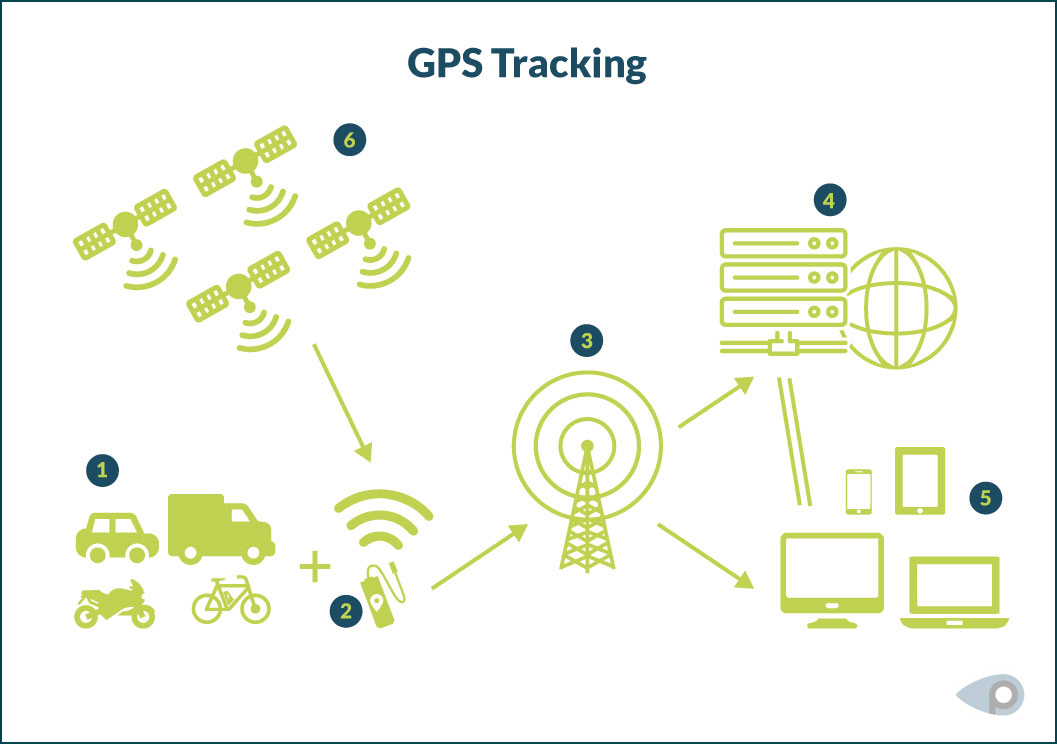 Important: Real GPS (NAVSTAR GPS) is fundamentally different from so-called “crowd GPS”, which is sometimes misleadingly called GPS tracking. Crowd GPS technology, on the other hand, works with Bluetooth location chips. In this case, the location of search objects is determined via the smartphone of other people. However, on this smartphone, the app from the same manufacturer must be installed- provided it is in immediate proximity and has GPS and Bluetooth switched on. Unlike a real GPS tracker, they are not equipped with a SIM card for data transmission to a smartphone, nor do at least three satellites determine the bike’s location.

To send the location of your e-bike from the GPS tracker to your app, so-called WWAN standards are used (WWAN stands for “Wireless Wide Area Network”). These are transmission technologies that are specifically designed for IoT applications and combine a long-range with low energy requirements. 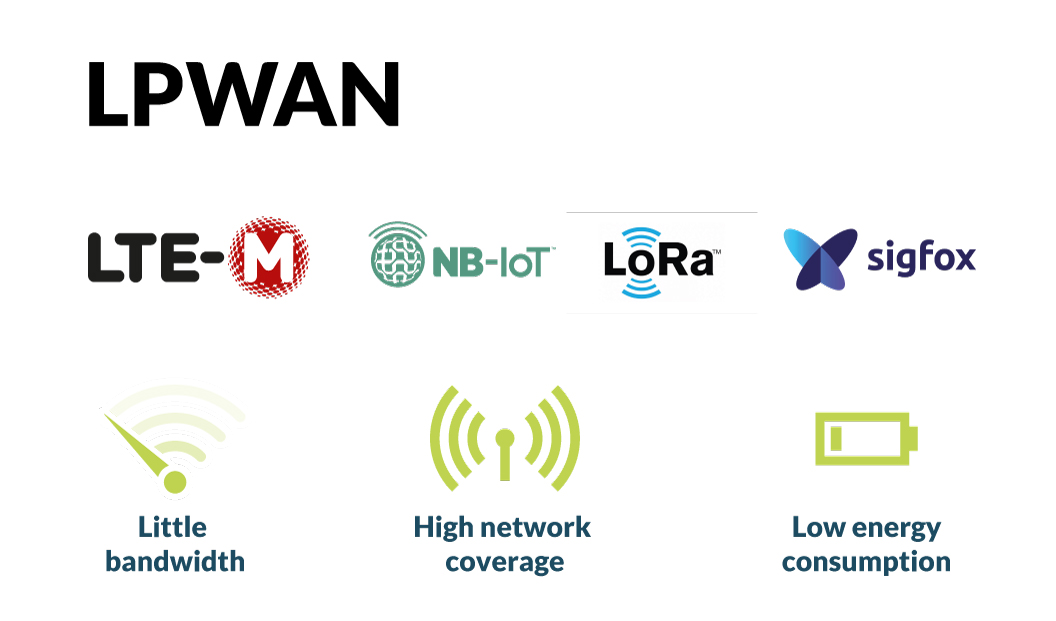 WWAN technologies are not comparable with technologies such as WLAN, Bluetooth, or EnOcean which are excellent for use in the smart home. These technologies have no long-range as in some cases they reach their limits at distances of 30 meters or less. LTE-M, NB-IoT, SigFox, and LoRa belong toLPWA, the low power wide area networks:

Both LTE-M, NB-IoT, and SigFox can be considered for GPS tracker deployment. However, only LTE-M enables live tracking. In addition, network coverage is not (yet) as seamless with any of the mentioned technologies as with 2G technology.

PowUnity currently relies on 2G cellular technology and on LTE-M in the future. The 2G standard is powered by the oldest and most stable network and offers seamless data transmission at home and abroad, in the city and the countryside. Optimal for tracking applications of e-bikes. The next BikeTrax GPS tracker generation will be built on the seminal LTE-M technology, the only one besides 2G that makes real-time tracking possible. 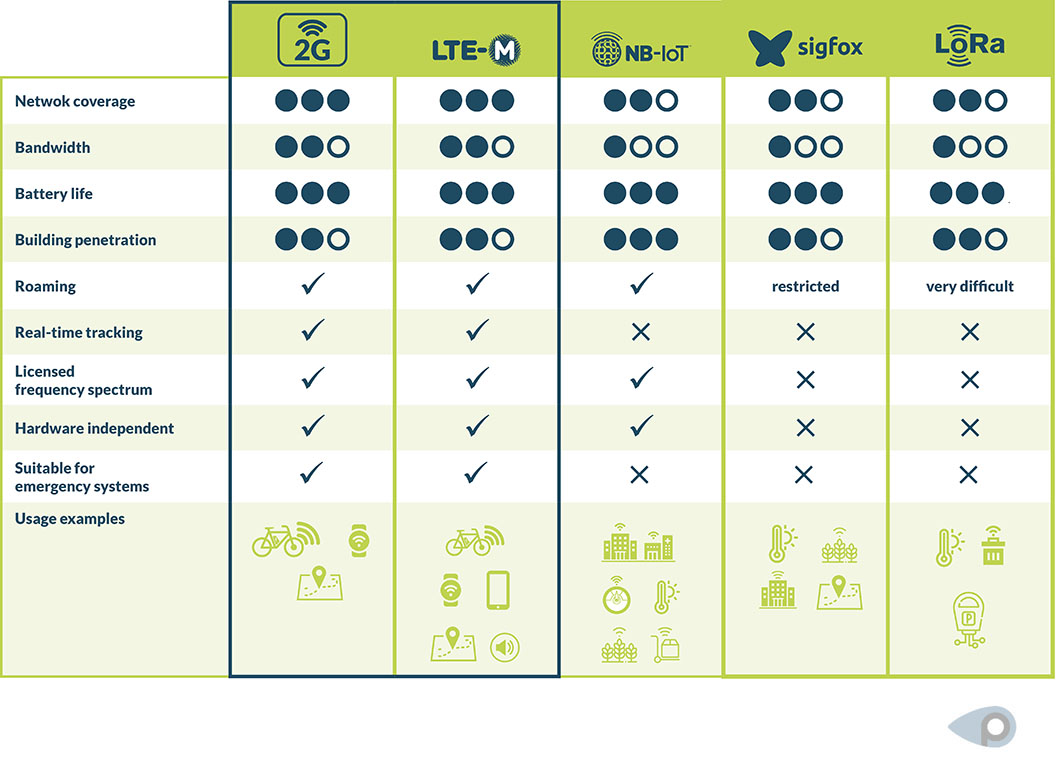 Now we discuss the question, “Why do I need real-time tracking?”

Why is it worthwhile to purchase an IoT GPS tracker for an e-bike in the first place, and what are the benefits of live location transmission for you as the owner? How do private users benefit from trackers, and how do companies that manage e-bike fleets?

The main asset of GPS trackers for e-bikes is theft protection. After all, pedelecs are expensive and popular among bike thieves. However, a bicycle lock, no matter how high-quality, offers only limited protection. In case of doubt, professional thieves will hijack your bike together with 10 others in a truck and pick the lock later at their leisure. Insurance companies will reimburse the purchase price of stolen bikes – at least if all conditions are met – but you won’t get your bike back.

A GPS tracker provides you with the real-time location of your bike and transmits it to your smartphone app. The app notifies you immediately if any bike movement without permission has been recognized. This way, you can prevent theft in the first place or locate your e-bike if it has been stolen. With the help of precise GPS data, the police can track your bike and save it.

Erfahrungen belegen es: Experience proves it: GPS trackers are the new security standard for e-bikes (and for motorcycles, too, by the way). No matter where your bike is taken, with a smart device, you have the best chance to save your pedelec and get it back. It is best to combine the tracker with several high-quality locks and a component lock.

In addition, depending on the tracker, you benefit from additional key features in the app:

Route diary: Route diaries automatically record bike tours in the app – without you having to carry a smartphone with you and remember to press start and stop.This is especially useful if you want to retrace routes you have already taken. Additionally, a route diary gives you an overview of what you have accomplished. With the BikeTrax GPS tracking device, you can export routes to apps such as Komoot or Strava.

Bike passport: In a bike passport, you can save relevant data about your e-bike, from manufacturer and model to frame number and purchase price. You can even store photos. This information is helpful at the latest if your bike is actually stolen and you have to fill in a theft report for the police.

Theft report: Ideally, you have the mode of sending the digital data from your bike passport plus information on the last location and time as well as the live location of your bike directly from the app of your tracker. This saves valuable time in an emergency.

GPS trackers are used by private individuals and by companies that own or use e-bike fleets. These include, for example:

To benefit from all these assets, the IoT GPS tracker must have some key functions and settings.

Smart fleet management with an IoT GPS tracker from PowUnity

What individual e-bikers want, from theft protection to seamless route recording, is also essential for companies specializing in e-bike fleet offerings, starting with protection.However, the following additional features are key for e-bike fleets.

The highlight of PowUnity’s BikeTrax tracking system is that the software can be customized for fleet operators and is suitable for any type of fleet management.

Additionally, BikeTrax’s software offers three ways to use it:

Like private users, e-bike fleets can register and store multiple e-bikes using the PowUnity app. This option is well suited for small fleets, for example, hotels that rent out few e-bikes. In this case, the app can be used both on the smartphone and via the desktop (on multiple devices, by multiple users).

Do you want all the BikeTrax features in one app with your own design? In this case, we offer you a co-branded app.

For larger rental services, the PowUnity platform is suitable for fleet management. Here, you have an overview of all your bikes. You can see at a glance which bike is currently activated or deactivated using different colors, and you can track all routes in real-time.In addition, two types of reports can be exported as Excel files:

Finally, fleet operators have the option to connect our trackers to their own systems via an API. This way, you can integrate the tracking into your existing digital booking system, for example, and combine an overview of your bookings with an accurate route record – ideal for avoiding fake bookings and perfecting your digital management.

Find out how the Austria-wide e-bike rental company eBike-Box used the PowUnity platform for a theft recovery of a remarkably clever vacation thief in this success story.

Which option is the ideal solution – app, platform, or interface depends on various factors, for example, the number of vehiclss in the fleet, the business model, or workflows.

Do you want to benefit from the many key assets of a GPS tracker as a private person or with a company? Pay particular attention to the following features when making your selection:

Tip: With or without SIM card? It is best to choose a GPS device with a SIM card ex-works. This way, you avoid unexpected roaming costs. In addition, with ex-works SIM cards, you benefit in most cases from a high precision GPS and good transmission quality and do not need a slot in the device.

You can find more information and tips on choosing a GPS tracker in our article “GPS Tracker Bike: Test 2021 – how to find the best device for you”. Here you can also learn why you can not trust many online tests and how you can recognize a serious comparison of different devices.

Conclusion – the possible applications of an IoT GPS tracker are diverse

The combination of IoT and GPS in modern e-bike trackers brings excellent potential. First and foremost, this starts with effective bike security and theft recovery. But IoT GPS trackers are more than e-bike protection. E-bike fleet operators can use GPS trackers to digitize and optimize their processes, avoiding fake bookings, for example, and viewing all of their e-bikes’ routes at once.

Whether within a city, nationwide, global, or across Europe, you can keep track of your one and only private bike or e-bike fleet at any time with the right GPS system.

The prerequisite for this is that trackers come with the right equipment, from using suitable wireless wide area networks for seamless data transmission without delays to company software solutions for fleet management and an API for smooth integration into existing software.